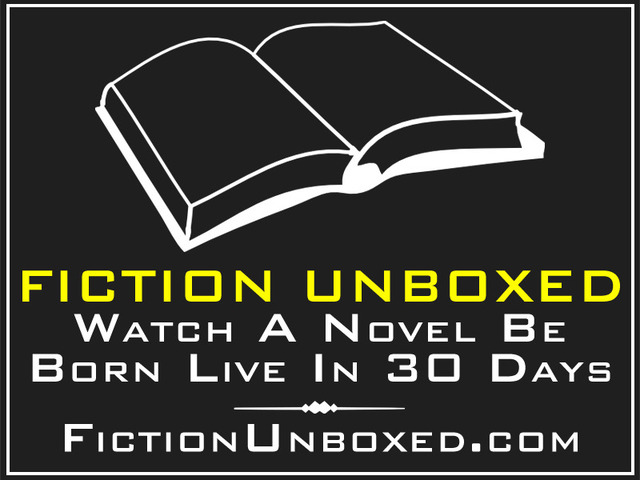 Tap to go to the Kickstarter campaign

Watch two bestselling authors write a book LIVE in 30 days (from nothing to print) and change how the world thinks about storytelling.

We’ve all heard that there are no longer gatekeepers in traditional publishing. But that’s only partly true, and not the most interesting part of the story.

There are more gatekeepers than ever, and publishing is changing, not dying. Artists who evolve with these shifts will be the most rewarded for learning to color outside the lines early.

Maybe this should make things easy for a modern creator, but it doesn’t. Too many would-be artists cling to the false belief that storytelling is something that’s only understood by a relative few — a kind of Illuminati who are keeping those precious secrets to themselves.

We want to show writers, readers, and the world that “story” is something that is already breathing inside you. Too many writers are afraid to tap their primal voice, falsely believing that there’s magic in story that they can’t access.

But it’s just not true.

The truth is, you’re walking around with that magic in you right now.

Fiction Unboxed is an experiment in publishing. We’re two full-time authors who want to prove that writing can be fun, and that well-told stories can come from a place of excitement and inspiration, rather than from the tortured soul of a “true artist.”

We believe in telling the stories we want to tell, regardless of genre. Tomorrow’s most successful books (and movies) will be those that most effectively tap into what readers want most: ENTERTAINMENT.

Readers want to think, feel, or escape, have fun, catch the scent of adventure and the thrill of the unknown. They don’t care where that story came from, how long it took to write, or where you went to school. Readers care about the characters you create and the situations you put them in — the two things most in your control.

It’s Time To Redefine How Stories Are Told

We’re going to take an idea from concept to finished book (digital, print, and — hopefully — audiobook) in just 30 days. Last year, when we wrote and published over 1.5 million words (that’s about one and a half times the length of the full Harry Potter series), we proved that storytelling could be fun for us and for our readers… and that good stories could, with practice, be told quickly.

We’re not looking to win a Pulitzer with our stories. We’re looking to win readers, and are doing exactly that one awesome story at a time. We want to show the world how we do what we do, in the hopes that we can fundamentally shift how writers approach the art of telling stories