In honor of Banned Books Week I’d like to share the artwork of JoeDiamondD.
You can view ‘Forbidden Library’, and more artwork by JoeDiamondD on DeviantArt.com.

D for Degenerate is the forth installment in Iain Rob Wright’s A-Z of Horror series, and the one that has been BANNED from Amazon. 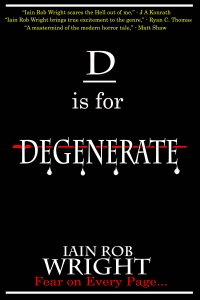 If you’re anything like me, knowing something has been banned is a huge selling point, and usually the only info I need 🙂 Adding Iain Rob Wright’s name to that fact only upped my obsession level.
Banned from Amazon doesn’t mean banned from existence though. So… never fear my twisted friends! It’s available directly from Iain’s website.

This is the tale of Nicholas Lempit. A con-man, thief, and degenerate. His dark desires have made him a traveler, and tonight’s dalliances lead him to a chance encounter with a kind, old farmer. Arthur is 83 years old, and has been alone since he lost his wife. For almost 20 years it’s been just him, his farm and his horses.
If Lempit can gain Arthur’s trust, he may be able to stay for a while. Lend the old man a hand, keep him company, be close to the object of his furry fantasies…
Arthur has a similar idea – but Lempit might just never leave.

FF’s
*Bonus points to Iain for his cleverly placed nod to Deliverance. Not a blatant reference, just enough to make readers inwardly smile at a very uncomfortable moment.
*Using the term ‘bird’ for a woman doesn’t seem to be as common as it once was. Maybe it’s just a more common UK practice… IDK. Whether it was used deliberately, or just the way the author talks, when I read it in THIS story… I was caught off guard by my chuckle.

Click HERE to get your copy of D IS FOR DEGENERATE from Iain Rob Wright’s official blog for only 99¢. 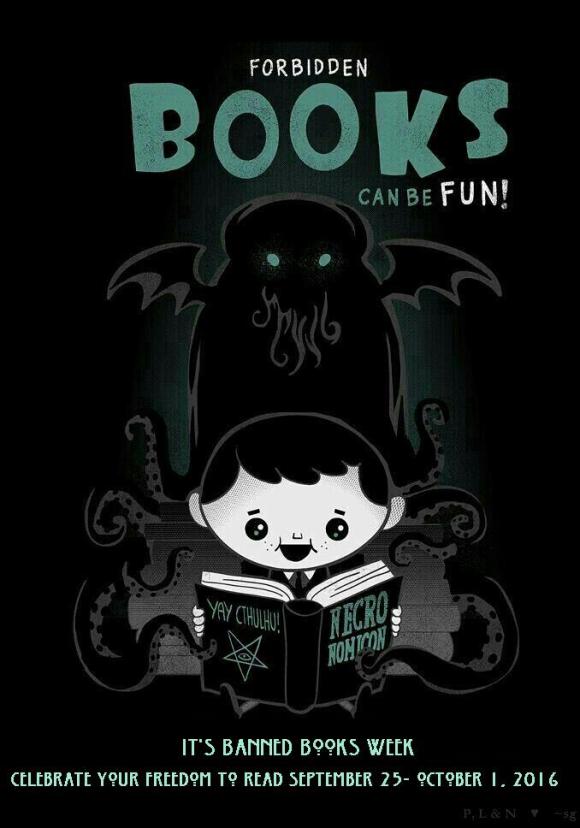 Banned Books Week was launched in 1982 in response to a sudden surge in the number of challenges to books in schools, bookstores and libraries. More than 11,300 books have been challenged since 1982 according to the American Library Association. The 10 most challenged titles of 2015 were:

Fifty Shades of Grey, by E. L. James
Reasons: Sexually explicit, unsuited to age group, and other (“poorly written,” “concerns that a group of teenagers will want to try it”).

The Curious Incident of the Dog in the Night-Time, by Mark Haddon
Reasons: Offensive language, religious viewpoint, unsuited for age group, and other (“profanity and atheism”).

Hundreds of books have been either removed or challenged in schools and libraries in the United States every year. According to the American Library Association (ALA), there were at least 311 in 2014. ALA estimates that 70 to 80 percent are never reported.

SUPPORT BANNED BOOKS WEEK – What You Can Do

Help support the Banned Books Week initiative by purchasing promotional products like the posters featured here, including T-shirts, buttons and bookmarks. Visit the ALA Store to purchase these products.

The Freedom to Read Foundation works every day to ensure that you have access to information you want and the materials you need. Become a member or make a donation today.

The American Society of Journalists and Authors sells “I Read Banned Books” buttons for $1 each. Check out their store for more information.