Cabin Fever by Michael Bray
My rating: 5 of 5 stars

Written immediately after finishing: It’s ten minutes until 4:am. Don’t finish this book at 3:50 a.m., because your neighbors might not be as understanding as mine… then again… I wonder if they did believe me. I wouldn’t ask too many questions of a girl who just woke me up with a shreek.
Maybe not THAT dramatic, but I DID cry out and scare the dog. That’s not nothing!! So good! Buy this! It’s short, a bedtime story. You won’t be disappointed, I promise.
18 hours later: I came across a code for a free Audible version of Cabin Fever, and I jumped on it. This is rare treasure 😉
Ok, show of hands – who has kids? Ok, so now the rest of you… Do youknow a kid? We all know that whatever you tell a kid not to do – that’s the first thing that they’re gonna do!! So if you’re hiding half naked, or half dead, or half anything chick in your little playpen, don’t randomly warn your family away from a place that they never knew existed! I actually don’t even have a problem with that! But it’s a 25 page book – I can’t say much without fear of spoilers.
Narrator: S.W. Salzman
I’ve listened to this narrator alot, and he’s read me plenty of bedtime stories. A very soothing voice.

I was about 25% into a reread of this yesterday when I ran into a copy of the audiobook via the author’s Twitter feed (@andersenprunty). I was doing a few things, so I switched it on right away.
Normally, (well, back when real life WAS normal), audio books are just a convenience for me, not a preference. I’ve trained my brain to become friends with my Kindle robo-voice to the point where I can listen to her during work commutes just like any narrator.
BUT…
The narrator of this Audible edition of Fuckness is so fuckin’ awesome that this ‘reread’ turned into an entirely new experience.

Jeff Bower is the narrator of Fuckness, and although I’m about to stalk his ass to see what else he’s done – he could just be The Voice of Andersen Prunty in my head forevermore. (Just DL’d an audio book which A.P. narrates himself, I’ll comment more after listening.)
Jeff Bower though…how can I explain… he has this evil little giggle that he does, kind of to himself, and it adds something undefinable to his character. Love it. It reminds me of that evil, psychotic side of myself when I’m heartily laughing at something that I shouldn’t be – does that help explain it?

[OK, so NOT a spoiler, but I’m trying to avoid pimping my blog too much. I’d like to stay more of a high class escort, instead of a cheap whore, hence the tag. (Yeah, hence!)

Looking for the audiobook code? There are some codes left for many of his books, US and UK, HERE.

So, I’m trying to link you up to Jeff Bower directly, but I’m getting lost in infinite link loops. Oh, the horror!! But, I  am seeing that he narrates non-fiction Wicca books, so… another bonus point for Jeff!  (UPDATE: Twitter @JeffBowerLA –  Loving husband. Aspiring Muppet.)

The books in Matt Shaw’s ‘White Cover’ Collection, aka ‘Fucked-Up Shorts’, are intended for the members of Kindle Unlimited who have been requesting short, sick, bedtime stories from the author.  Matt is not one to disappoint his readers!!

Each book in the collection is part of the Kindle Unlimited program, and they are available to download for #FREE!

I didn’t use these for short, sick bedtime stories, though. I started off with good intentions last night… but, then I binge read them all.  Well, almost all. I need to get two more after I return the ones I finished.  (Reviews are coming – later today.)
I also HAVE to get the audio version of TED – the sample of Chris Barnes‘ narration had me dying! (I’ll explain in my review.  I’m going to Hell for TED anyway, might as well book my own suite!)

Titles in the Fucked-Up Shorts Collection include:

For $3.99 you can find most of the White Cover Collection in one place –

FUCKED UP SHORTS: VOLUME ONE  includes: 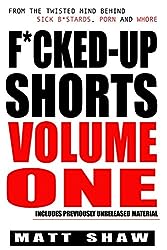 * A word from Matt Shaw
* Watching, Waiting
* Headaches
* F*ck Me? F*ck You!
* Ted
* Snuff
* Nugget
* and the previously unreleased title “The Box”

I haven’t sat down to properly review this yet, but, my first thoughts on this aren’t very bad.
This is the first book I’ve listened to in Audio in many many years. (Not including the trial runs I’ve been having with the ‘text to speech’ option on my Kindle). Now that I think about it, I believe that NEEDFUL THINGS was the last one I purchased, on cassette.
Campbell Scott, the narrator, wasn’t bad. He did well for such a long book, I suppose. (I got an MP3 of one of Jason Christie’s ss not very long ago, and THAT narrator was a blast to listen to!)
The story, while pitched as another zombie tale in today’s zombie drenched world, isn’t a real zombie story. To borrow the word from Art Griswold, these ‘people’ are suffering from a RAGE type virus, rather than your ‘dead walking the earth’ zombies. They are not dead, they aren’t (not really) shambling around looking to feast on brains. They’d just as soon eat a Twinkie.

THE PULSE is what they’re calling it. Transmitted through the cell phones, everyone who was on their cell at the time of The Pulse, or tried to get on any time thereafter, had their brains… ‘reprogrammed’, turning the people into ‘mindless’ things, much like animals. The book started fast, and pulled me in. Consider that I only listened on my way to and from work, and that I did not lose intrest. Towards the end… these past few days, I’ve bypassed rides so I could enjoy my walk. To put the synopsis into the most simplistic terms… Cell is a SK story about a man searching for his son in a world gone mad.
I really, really liked the main characters.
Clayton Riddell (looking for his son, Johnny, and his soon to be ex-wife, Sharron).Tom McCourt, Alice Maxwell, Jordan and Charles Ardai (aka Headmaster Ardai). A couple more along the way, a couple at the end, along with the story’s main antagonist, The Raggedy Man / The President Of Harvard. SK developed characters that I cared for in this story, not just people who are in his books. I don’t know if that will make sense to all of you, but, those who ‘get’ it know what I mean about the majority of SK’ s later works.

So, mainly this… if you get the book for a decent price, give it a whirl. I don’t think you’ll be disappointed. If you’re looking for a zombie story, give it a pass – this is not what you’ve been led to believe.