It’s been a minute since my last post, and I truely apologize for the lack of activity here! Sometimes life just happens, and all we can do is go along for the ride. It’s up to us if we’ll throw our arms up and enjoy the roller coaster ride, or if we’ll hide in the corner with a barf bag :p

I’m on a roadtrip with Eve, (aka: my partner in crime), and today we got to visit the Duluth Murder House – GLENSHEEN MANSION.

I’m sad to report the lack of any paranormal activity on our visit, but I believe that the absence of any ghostly contact is directly connected to the continuous ‘crop dusting’ received from another member of the group – or… perhaps ghosts get gas and they were with us all along!

Duluth, MN – The newspaper headlines read like a tale from a dime-store detective novel. An heiress murdered, a fortune to blame, and all set in an enormous mansion overlooking a lake. And now, more than thirty years after the crime, the victims are still not at rest. During the night, lights flicker and shadows glide from room to room, as the dead continue to tell their tale, unfettered by the truth, that they died long ago.

The classic haunted house story has become something of a cliché in literature. But every now and then, there appears a story that, rather than being part of the stereotype, seems to be the reason for it. How many times have you read a story in which a house was haunted by a wealthy person, murdered for their riches, the victim of a tragic and violent death? In Duluth, Minnesota, the classic tale came to life, and the high-peaked mansion still stands testament to the events that occurred there. The lawn is immaculate, the silver polished, and the ghosts of the previous owner still roams the halls. 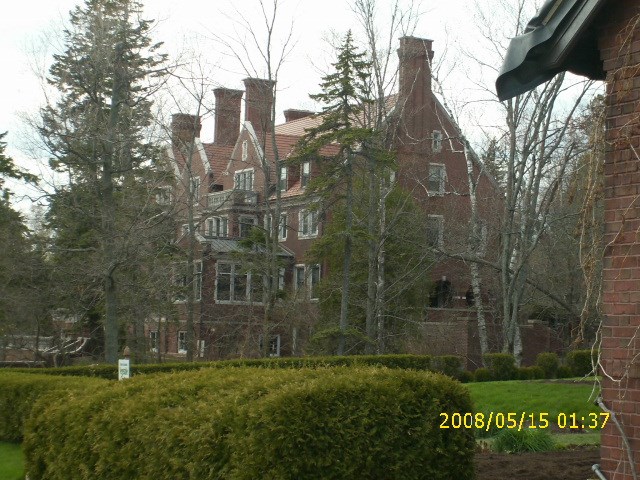 History:
Built between the years 1905 and 1908, the enormous Jacobean structure called Glensheen was originally the family home of mining-millionaire Chester Congdon and his wife, Clara. They, along with at least two of their seven children, took up residence in the house and lived happily for eight years, until Chester’s death in 1916. While there is little mention of Clara, it is known that she lived until 1950, presumably in the house. On his death, however, Chester left his considerable fortune to his daughter Elisabeth.

Elisabeth saw no need to conform to the societal rules that said she had to be married, but she did want children. So, in 1932, she adopted a young girl, whom she renamed “Marjorie Mannering Congdon.” As she grew older, Marjorie exhibited strange behavior, leading to her being tested and diagnosed a sociopath. Marjorie’s habits of borrowing money was an embarrassment, as were her other, more overt behaviors. After her first husband left her with seven childred, she was placed in an institution, where she seemed to make progress. Shortly after her release, she remarried a man named Roger Caldwell, and for a time things seemed normal and happy.

She continued borrowing money from her mother, with which she lavished gifts upon her children, but still she wanted more. No matter how much money her mother gave her, Marjorie quickly burned through it and came back again.

On June 27, 1977, Elisabeth Congdon was found murdered, suffocated with a satin pillow, in her bed. Propped on a bench in the stairwell was her night nurse, Velma Pietila, who had been beaten to death with a candlestick. Aided with evidence in the form of a hastily-written will (dated just three days before her death), nd a ring belonging to Elisabeth that Marjorie was found wearing after her mother’s death, the police arrested the pair. Roger Caldwell was found guilty of the murder while Marjorie was acquitted. Caldwell’s conviction was overturned, but he later confessed to the murders, then killed himself.

Ghosts:
For more than thirty years, people have seen apparitions of the two murdered women roaming the halls of the stately mansion. Employees of the house as well as visitors have reported seeing shadowy figures glide about in the halls and basement, as well as getting the feeling of being watched. Others report lights flickering or going on and off by themselves. Some reports even claim that the two women stand in the upstairs windows, looking through the trees and toward the great lake. There is also at least one report of a piece of candy being rolled back and forth over a dresser, though that one has not been confirmed.

One phenomenon that has been confirmed, however, is a strangely eerie feeling, or even feeling sadness or panic, when visiting the area where Elisabeth and Velma died.

Present Day:
In 1968, Elisabeth gave Glensheen Estate to the University of Minnesota, Duluth, who granted her a home there until her untimely death. Today it stands almost exactly as it did thirty years ago, but as a museum. Containing nearly all the original furniture from when it was first constructed, the house boasts both guided and unguided tours, as well as “slipper tours,” in which guests replace their shoes with slippers and are able to walk beyond the velvet ropes.

Marjorie, though acquitted of her mother’s murder, didn’t stay out of jail for long. She was charged with bigamy in 1981, and was suspected of killing her new husband’s wife. She was then was arrested in 1984 for arson, and suspected of murdering her third husband, although police also suspected his death to be the result of a double-suicide pact gone wrong. In 2007, she was arrested again and charged with theft, fraud, and computer tampering.

Best Times:
The house is open for visits year round, with many special events to be experienced. However, due to sensitivity issues stemming from relatives of victims living nearby, tour guides are instructed not to talk about the murders, and by proxy, the hauntings. And although sightings of the unfortunate women are reported year-round, it seems the best times to visit are during the month of June, specifically around the date of Elisabeth’s death, if one wishes to have a paranormal experience. For more information, visit Glensheen’s website at their website.