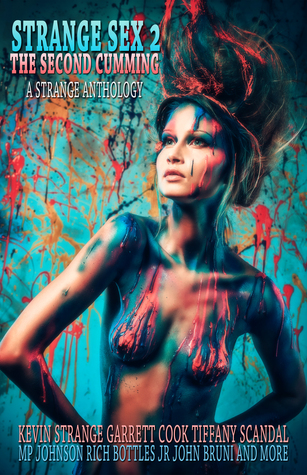 I’m ashamed at how long it’s taken me to get this review posted, but – I do have a valid reason! I read this with my first KU subscription, and I didn’t get three of the shorts reviewed before the book was returned. So, my apologies to Garrett Cook, Gregor ‘Goatboy’ Cole, and Kevin Strange. I loved the stories – robotic mutations, a very dark auction, and another short guaranteed to send me to Hell. (Don’t worry, I bought curtains… it’s lovely there.) Problem? I don’t have them in front of me to detail them right now… I’ll remedy this very soon, but for now… let’s pimp SS2 as a whole. Another 5 star anthology from the gang at SHB!
(My apologies to RRP if I left you uncredited, my inner timeline is slightly skewed)

Tiffany Scandal: FLAT LIKE KEN
FLAT LIKE KEN puts a sexy spin on the lives of some of our favorite childhood friends! I’m comforted in knowing that I wasn’t the only person that thought Ken was hanging out with Burt & Ernie at that bar downtown…

John Bruni – ZERO RECALL
If Adam Sandler was a rapist, and enjoyed torture, 50 FIRST DATES would have been a completely different movie!
Another great SS from John Bruni – the Lombard-esque twists threw me, and I didn’t see this ending coming. I got in touch with John right when I finished, I couldn’t understand how he got me feeling sorry for, and almost rooting for, a very twisted bad guy.

MP Johnson – GROUPIE
Punk rock! If I had Social Distortion serenading me from my boobie, I’d be too happy to worry about the ‘HOW‘! The Oxycontin would be used as a party favor while I tried to get Mike Ness to cover COMFORTABLY NUMB.

Gabino Iglesias – MANDINGO PARTY MASSACRE
Neil knows that something isn’t right while he’s discussing the specifics of the service he & his men are to perform for this old man’s trophy wife. It’s her birthday, and while hiring a group of black men to satisfy your wife is a service that not all men would are secure enough in their own sexuality to do – it’s lucrative enough to keep the business afloat. This particular man is setting off Neil’s What-The-Fuck-O-Meter, so when they arrive at their destination that night – they’re ready for anything.
What happened isn’t an event you’d think you’d be able prepare for, but Neil and his Mandingos have learned a thing or two over the past two hundred years. Sadly, this kind of private party happens more often than you’d think possible, and the men are more than prepared.

Brian Williams – N.A.D.S.
Sam literally runs into Dave on his way to the shops one morning. An encounter that, on any normal day, would be forgotten almost immediately. But on this day, in this place, it’s as if the universe intervened to assure the events to come. This love story centers around three men, and the very special women in their lives. These relationships wouldn’t have happened if it weren’t for one man – Dave, the founder of N.A.D.S. Dave has a surprise lined up for his friends, a very special surprise that will make people all over the world will stand up and take notice.

Rich Bottles Jr. – PINKFISH
Rich gets bonus points for having the best opening line of any SS in the SS2 collection – you gotta give it up for Oscar Wilde like wordplay that good!
While trying to illegally capture a new baby orca whale for the Under The Sea park in California, the fisherman captures something a lot more interesting in his nets. Under The Sea’s head animal trainer is very interested in this new discovery, and devotes every minute of his time to this unique creature.