This is another review that was lost in one of the blog moves. I’m kind of happy about the loss, though – I enjoyed it more the second time around. 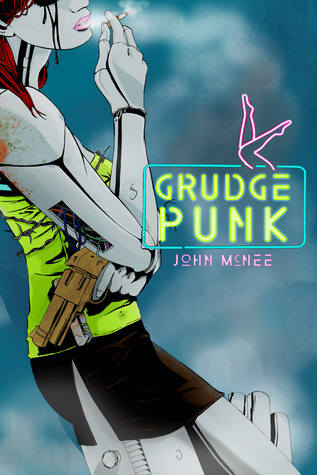 Grudgehaven – “A city lost to the darkness, where acid rain drums on a hundred thousand corrugated iron rooftops, and cold, mechanized eyeballs squint out of every filth-smeared window”

An anthology of dieselpunk-bizarro-horror-noir. Nine tales of brutally and betrayal from a city like no other, from an author like no other – John McNee.

In The Flesh:
Bailey, a Private Dick straight out of a late-night film noir, has been hired to track down a broad named Lena by Clockwork Joe. Where might she be? The house of sin & seduction, the house of flesh. The Casa Carne is, literally, a living thing, walls decorated with red & blue veins, and the furniture showing its age in liver spots. Once a popular place for the S&M underground, they say once you spend one night at The Carne – you’ll never want to leave.
You need to know pain to know pleasure.

A Hand Walks Into A Bar:
Seriously. A hand walks into a bar.
It hops up on a stool to grab Rhino’s attention. Communicating in the best way it knows how, the hand somehow convinces Rhino to follow it somewhere. (I know I wouldn’t have followed a disembodied hand anywhere, not even down a trail of Hershey’s Kisses.)
The hand leads him to the rest of it’s body, a kidnapping plot led by a couple morons, and… a new, unconventional friendship.

Gutter Politics:
Being the mayor of Grudgehaven isn’t all about politics. Hell, it’s not about politics at all. For Eddie Coll, it’s all about power, promises, and being the wanted candidate of the most powerful bosses left at the end of the day.

Down To The Bone:
As the radio breaks in with the news of the impending Category 5 acid rain storm, most Grudgehaven residents prepare to survive the night. There are others though, residents who plan to make the best of the deadly event.

The Corridors Of Power:
Rising in power quickly helps eliminate your enemies, but for Cynthia it only means that she needs a new job. Finding one isn’t the hard part, though. Her morals are starting to make her a bit uncomfortable.

A Real Piece Of Work:
Alesa has lived a hard seventeen years. Taking care of her dying mother, living with her over zealous, preaching father, and being one of the least favorable people to gaze upon… well, it all eventually took it’s toll. Alesa wants to be reborn, and there ain’t no better place for that than the Grudge.
I wish there had been more of this character in the remaining stories.

One Parasite To Another:
“Welcome to the club of most of us.”
Father Cicero could possibly be the wisest man in Grudgehaven. Sinners need to purge themselves, and Cicero’s memory is phenomenal. He should have remembered his seven deadlies though… greed can be a bitch.

God’s Of The Damned:
Captain Pazzano is just trying to do his job, but bringing Regan in is not going as smoothly as planned. The Widow’s Burden is just a story told by the Damned… right?

All The Wrong Parts:
Louie is just trying to live his life – make some honest money, and try to nurse his wife back to some semblance of health. When Frank shows up (alive) with a plan and needing a partner, Louie knows that he cannot turn up the opportunity. Working with The King of Broken Glass is never what it seems, and Louie might end up in a worse spot than he started.